2004 was all about, well, 1984… again.  The only new Mac related television commercial that ran during the entire year was a re-digitized version of  1984.  Makes you wonder if 2014 will bring the same at this years gigantic football game that you’re not allowed to say the name of or you’ll get sued.

No, it’s not Mac.  We know.  It appeared in 2004 and 2005, that Apple may have decided to completely forget about selling Mac computers.  Or, at least marketing them through television to consumers, as there were no new television commercials launched for the Mac in 2004 or 2005.

This could also be due to the fact that Apple’s third party resellers dropped in half (because Steve wanted it that way).

Jobs severed Apple’s ties of every big box retailer, including Sears, Best Buy, Circuit City, Computer City and Office Max to focus its retail efforts with CompUSA Between 1997 and 2000, the number of Mac authorized resellers dropped from 20,000 to just 11,000, with majority of these were cuts made by Apple itself.

But, we all fell for it didn’t we?!  By getting the masses using their other products, like the iPod, they’d be able to expose them directly to their machines… especially once their stores would open.  Which, by the way, was going to happen in 2006.  Bam. 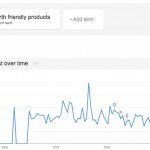 Green is in and Mac is green!  You’ll notice in the chart that, all of a sudden, in 2006, people started being really concious about Earth Friendly Products.  Jobs took a cue from that and launched the Apple is green ad in 2006.

Since then, Apple has been building one of the most energy efficient and environmentally friendly machines on the market.  Unfortunately, they still need to be created in China.  We’re pretty sure this makes their factories not the best for Mother Nature.

I’m going to use my selfish ambitions as the writer of this article to post a compilation of every single Get A Mac campaign commercial, so, if you have a while, check them all out.  This campaign, in my opinion, is the one that changed the minds of millions to switch from PC to Mac.

Apple, in their constant drive to make things smaller and more powerful at the same time (although many said it was impossible to do so), launched the MacBook Air in 2008.  This commercial is the first to bring the light and fluffy music to their ads which will stick for awhile.

It’s amazing that Apple can, in 30 seconds, get you inspired with nothing more than a piece of aluminum, a hand, and some music.  Our wives told us, though, that they can do the same.

The new MacBook Air ad ran throughout 2010 as shipments continued to rise.

No new Mac ads appeared in 2011 that we are aware of, but the iPad was the new star.

Apple decided, in 2012, to push their store Geniuses with 3 rather comical ads showing the real life value of an Apple store genius.  Our favorite, above, is fittingly called “Labor Day.”

After years and years and a ton of scrutiny, Apple has created the new MacPro.  It’s extremely unique and deserves it’s own commercial.  Here it is.

So far this year, we have not seen any new Mac commercials.  The other products seem to propel the sales of the computers.

Everyone is wondering what Apple is going to do in the gigantic pigskin game this year, if anything.  We did some investigation, but couldn’t find them listed as a potential advertiser anywhere.

We hope you enjoyed the commercials as much as we enjoyed putting them together for you.  Please take a few moments to tell your friends about our list or share it on your favorite social network.