Your old Mac keyboard just isn’t cutting it anymore? Are you out searching for the best Mac keyboard out there? Well you’re in luck, because we’ve been searching for one too, and we’re here to show you exactly what you can expect from a Mac keyboard. If you didn’t know, there are really a lot of quirky, whimsical, practical, or stylish Mac keyboards spread around the market, just waiting for you to buy them. You just have to know where to look.

Feeling like adding a dash of panache to your favorite computer? Well, there are a lot of keyboards that make you feel like a true king of looks. After all: nobody masters the old-fashioned, vintage look better than Mac owners, am I right?

Qwerkywriter verdict: the best Mac keyboard for a vintage style.

Qwerkywriter: unleash the hipster in you with this keyboard that looks like it’s been made in the 19th century. Except it hasn’t! It’s a fully functional, best keyboard for mac! But get this – it even works on Windows as well, and has Bluetooth connectivity so that you can maybe connect your iPad. Sweet! The only downside is the price – you’ll have to spend about $349, which are basically for the looks.

Matias TactilePro 4: nothing screams “I love history” than using a TactilePro4. It’s basically a mechanical keyboard that works particularly well with a Mac. An upgraded version of the big old Macs’ from the past, this keyboard is excellent if you want to set free your writing skills and annoy all your house members while you’re at it (it does click – a lot).

For this list, we’ve decided to stick only to the best mac keyboards that have the Mac control keys integrated. Also, you will probably see some the best wireless keyboard for Mac right here in this section. These keyboards are the epitome of practicality – especially for those of you who are into Macs professionally.

LogicKeyboard Final Cut Pro X: are you a video editor? If that’s so and if you like to use the Final Cut Pro tool from Apple, then this device will not only be useful – it will revolutionize your whole world. If you used a traditional keyboard before, your mind will be blown by the sheer awesomeness of the shortcuts available on this one. It’s the best mac keyboard for video editing and there’s no way around this.

Belkin Wireless YourType Numeric Keypad: do you often find yourself in need of a numeric pad for your Mac? Most Macs come with a keyboard that doesn’t feature a numpad, so buying one separately will save you a lot of trouble when you’re dealing with numbers. It also fits perfectly with the original Mac Wireless Keyboard, which we also recommend as being the best wireless keyboard for Mac.

This is not to say that the following queens of the Mac keyboards aren’t at all practical. On the contrary – we chose these because they are practical and stylish at the same time. The next two best Mac keyboards are not only designed for the Macs, but also work extremely well with iPads and other devices, even those that run Windows.

Logitech Bluetooth Easy-Switch K811: This is it. We’ve found it – the best keyboard for Mac there is. We are not joking! Just check it out: it looks cool, it works cool, it has cool buttons that can let you switch between different devices, and it has Bluetooth connectivity. If only it had chocolate integrated, then it would be the best thing ever! And the price is close to nothing – definitely the best buy mac keyboard there is. 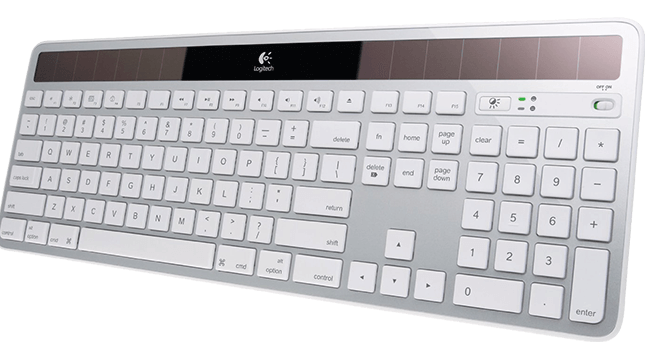 Logitech K750 Wireless Solar Keyboard: This keyboard is built to worship the sun – just like the ancient peoples. No really – it’s solar powered! Now you can finally type away on your next bestseller while sunbathing at the beach! Perfect combination: style and sophistication. What more could you need except, well, maybe to actually have an idea for a book.

Have you decided on the best Mac keyboard? Are you going for the best ergonomic keyboard for mac (which is obviously the K811)? No matter which best keyboards for Mac you decide upon, be sure to also get the best mac keyboard cover, because you want to keep it in perfect condition.