Cool Siri Tricks You Didn’t Know She Can Do

Apple’s Siri is constantly on the lookout for ways in which it can increase its user interactions and it’s easy to lose touch with all the cool new updates that have been added over time. So we’ve decided to present you with a few cool Siri tricks you didn’t know she (or he) can do. And we’re not just going to stick to the typical funny answers Siri gives, but we’re also going to mention some really useful things that can help you be the life of any party (or just that weird person sitting cross-legged in a corner talking to a phone).

Whether you want to get a hold of that song name in a hurry, check out what your internet friends are saying, or get directions to a restaurant you’ve never been to – Siri can help. Once again – a strong reminder that Siri isn’t just for fun and teasing. You can actually get important information from Apples most trusted AI assistant. Here are the first three cool Siri tricks:

Apart from the awesome Siri tricks, we’re also going to show you 10 fun questions that can make you laugh hysterically while talking to a phone. Here are the first five:

‘What to wear for Halloween?’ – Siri will suggest going as an eclipse, among other things.

‘When will the end of the world be?’ – Siri will say that it won’t as long as she’s charged.

‘How many Apple geniuses to screw in a lightbulb?’ – I won’t spoil the answer, the joke is too funny.

‘Testing’ – If you want to know if Siri can hear you, use this. It will also give a pretty funny response.

Ever wondered where the airplanes passing overhead on the night sky are going? Or what this new movie that you’ve never heard of is all about? Or maybe you’ve sometimes wanted to take a quick selfie but the moment went by too fast. All these problems are now solvable thanks to these cool Siri tricks: 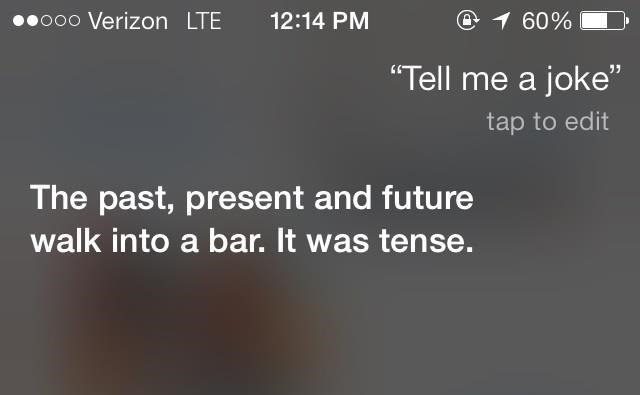 Now that we’ve gotten over all the important Siri tricks, it’s time to relax and have a bit of fun once again by asking Siri some stupid-but-hilarious questions. Here are our last five picks for secret Siri tricks:

‘Why do you vibrate?’ – asking Siri this will prompt an answer with a cute reference to the binary coding involved.

‘Give me a good book’ – if you run out of stuff to read, Siri will make a really funny joke before giving suggestions.

‘I’m getting a new smartphone’ – doing this isn’t so nice, but it will nonetheless prompt a very sad reaction from Siri.

‘What does the fox say?’ – Asking the popular question will make Siri word out the exact lyric of the song.

‘Supercalifragilisticexpialidocious’ – Tell this to Siri and she will ask whether or not it’s really Mary Poppins talking.

Last Cool Siri Trick: “Remind me of this”

As a parting note, we will leave you with the coolest update Siri has ever received. Now get this: if you’re looking at something, anything (email, app, specific area of an app, photos, calendar, etc.), Siri can and will remind you of that specific thing, if you want her to. The only thing you have to say is “remind me of this.”