Leaked Video of a Thinner iPhone 6 Surfaces in China

Since we’re as excited as everyone else about rumors surrounding the upcoming new flagship phone from Apple , we’re happy to let you know that early July brought us a brand new leaked video of a thinner iPhone 6. You can watch the video here, on a Chinese blog called iFanr. The news of the video reached European shores via the Nowhereelse.fr blog, with the text translated via Google Translate. In other words, the video’s content might prove a bit difficult to comprehend, but this does not detract from its noteworthiness. The leaked video of a thinner iPhone 6 (allegedly) features a closer examination of the phone’s front panel, in black.

The video follows a leak of two photos, published on 9to5Mac.com – you can see one of the pictures below. The photos in question show the front panel of a possible 4.7 inch iPhone, both in white and in black. In their turn, these photos were a follow-up on an April leak, which also features the front panel of a 4.7 inch phone. This time, we got a look at both the white and the black version. The edges of the panels are slightly rounded, as many have surmised about the upcoming phone. The panels also appear to be glossier than on previous iPhone models. The photos also indicate a few structural changes to the device: the front-facing camera appears to have been moved slightly toward the left of the earpiece. The motion detection sensors have been moved to the top of the phone. All in all, these signs point to a return in design to the iPhone 4, since the front-facing camera of the iPhone 5s is situated above the earpiece. When shown side by side with the front panel of the iPhone 5s, the difference in size becomes evident. 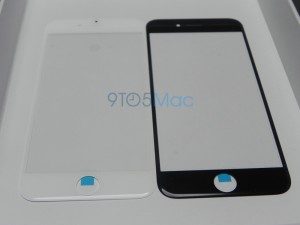 Several other leaks accompanied the above-mentioned photos. The Internet swarmed with presumed manufacturing molds, backlight panels, and rear shells of the iPhone 6. Commenters have expressed doubts about the veracity of the rear shells – according to Japanese website Nikkei, the actual iPhone 6 will probably come without the massive antenna stops depicted on the mockups of the phone that have been leaked until now.

What the leaked video of a thinner iPhone 6 contains

The video leaked by the Chinese Mac rumor website comes to confirm the veracity of several of the above rumors. For one thing, the featured panel does display a thinner profile or bezel, as well as curved corners. Once again, the aperture designed for the front-facing camera is situated closer to the left side of the earpiece. Finally, the phone is decidedly bigger than the iPhone 5S, also featured in the leaked video of a thinner iPhone 6. However, as the video goes to show, it’s still possible to use this phablet-like device with a single hand.

The release date for this thinner, larger, sleeker iPhone has yet to be announced. There have already been several reports on this issue, with some sources citing September 19 as the date and others opting for September 25. While it’s becoming more and more of a certainty that Apple will release an iPhone with a screen diagonal of 4.7 inches, it’s yet unclear whether or not the same date will bring us an even larger, 5.5 inch version of the new generation phone. According to some reports, Apple has been met with some production issues of this larger phone and might postpone its launch until later in 2014, or even until early 2015. Other reports and rumors say the company will release both phones at the same time (both to come with an A8 processor, according to reports).